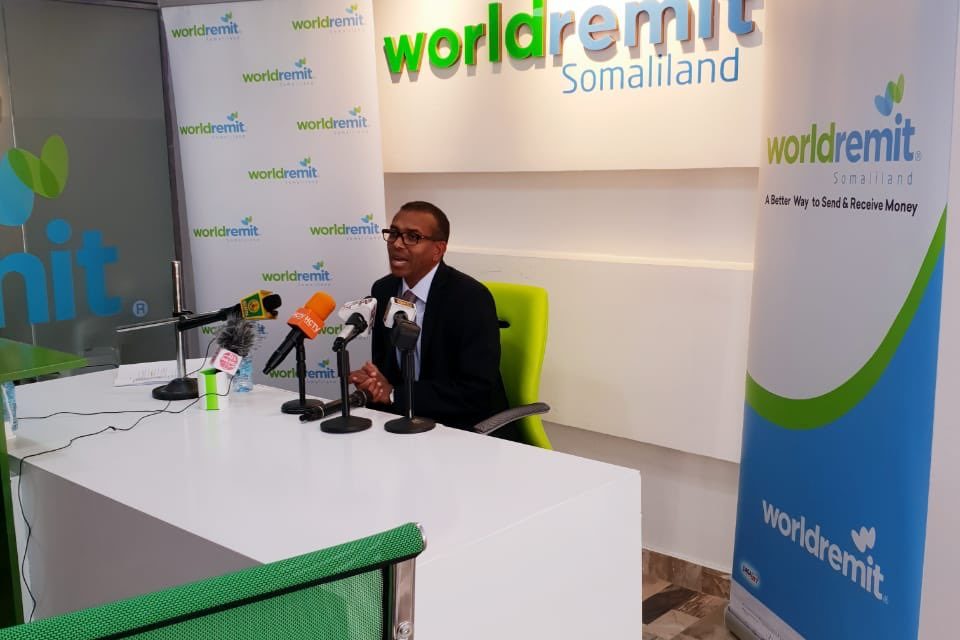 Most of us have all heard of WorldRemit – a UK based global money transfer company founded by Somalilander Ismail Ahmed. They have really shaken up the remittance industry through innovation and embracing new technologies. Some key facts about WorldRemit:

So they’re well on the way to becoming a unicorn (worth $1bn+). What’s the significance of the Somaliland market then? A small market with many competitors such as the market leader Dahabshiil. Somaliland was indeed one of the first countries WorldRemit started off with and made a significant move back in 2013 when they enabled direct remittances to Zaad mobile wallets – it was somewhat revolutionary as someone from the diaspora abroad could send money direct into a relative’s Zaad mobile money wallet within minutes (anytime via their phone) – even Telesom who actually own Zaad did not have the foresight to offer this.

More recently however WorldRemit opened an office in Hargeisa for another strategic pilot. The launch ceremony back in August 2018 was attended by Ismail Ahmed himself and other leading signatories. The new office was opened – located on the first floor of Nuur Hawse Plaza on 26 June Main Street in Hargeisa. It was unfortunate however that the company completely rebranded a couple months after! If you checkout their website they’ve gone with a totally new colour (purple) and new logo type.

So how is Somaliland the pilot for this new African strategy? Well, they launched an ewallet themselves which would allow Somaliland locals and residents to store and send money abroad via theWorldRemit app. This will kind of set a new precedent as with no formal banking sector it has traditionally been difficult to send money out the country in a fast, cost effective manner. WorldRemit’s broader strategy is to target intra-Africa money transfers that has traditionally been amongst the most expensive in the world (according to World Bank). Founder Ismail Ahmed said:

“Africa is a crucial market for us and over the next few years, we will expand our services so customers can send and receive with WorldRemit, getting the benefits of our fast, secure online service.”

To further illustrate this point, in a recent article, Ismail was asked:

Where do you see market growth now?

“Until now our business was about sending remittances from developed markets to developing countries. Because of digitisation now we are starting sending money within and between developing countries, particularly in Africa where we recently launched the intra-Africa transfers. Because of mobile money, we don’t need to collect cash, so it’s easier to do a digital cashless service for consumers in Africa. Another case is small businesses that want to buy goods and services from Asia, whether it’s India or other markets. So we can allow an east African small business to instantly send money to a bank account in India, instead of those businesses relying on legacy banking and SWIFT systems which could take days.”

Somaliland is therefore the perfect territory to pilot this new service targeting:

Outbound senders will have the option of sending for cash pickup, direct bank transfer or to other mobile wallets.

All this is being started in Somaliland first and will then be rolled out across the fast-growing economies of East Africa – Kenya, Rwanda, Tanzania and Uganda.

We are in no way affiliated with WorldRemit but just giving credit to the on-going innovation which should hopefully have a positive impact on local business people and residents of Somaliland. Unfortunately the ‘main banks’ in Somaliland have failed to penetrate the market, bring technological innovation and service the needs of the people. Increased competition can only benefit the end customers. The only downfall is when (if) WorldRemit scale we cannot envisage many other jobs being created – other than a few people at their Hargeisa office. We can only wait and see. Also, how much tax will they generate for the Somaliland government? Again, we will wait and see.  All in all however this WorldRemit Somaliland ‘pilot’ has most probably been a success. What are your thoughts?